Interdisciplinarity is nothing new. The seven liberal arts, including grammar, logic and rhetoric (the trivium) and arithmetic, geometry, music and astronomy (the quadrivium), have long been considered the fundamental basis of Western education. Though conceptualized in different ways over the centuries, the disciplines continue to provide a basis for a liberal arts education, subjects that were considered necessary for successful engagement as a citizen.

An article from Education Week in 1985 referred to an initiative by the Carnegie Corporation aimed at improving education in “mathematics, science, engineering and other technology-related subjects.” By the 1990s, the configuration of science, mathematics, technology and engineering had begun to gel, and in the next decade funding was being designated for initiatives involving the disciplines by state and federal government agencies.

In 2005, the STEM caucus was established in Congress, possibly representing the first use of the acronym. At this point, the idea of joining STEM forces was to expand growing technology and engineering instruction by building on its interdisciplinarity to the well-established areas of mathematics and science education.

In more recent years, the STEM acronym has been applied to many things, including economic development initiatives that involve a technical workforce, problem solving pedagogies for the classroom, broad societal challenges that require methodologies from across disciplines and a whole host of children’s activities and toys that include building or creativity.

On this site, STEM is used in its basic form to include Science, Technology, Engineering and Mathematics as they are enacted in research, teaching, outreach and engagement on the campus of Appalachian or with community partners. However, there are many ways that STEM provides the spark for other collaborations including disciplines as diverse as music, dance, counseling or literature.

68 days spent at sea by Dr. Ellen Cowan (Geological and Environmental Sciences), traveling on the JOIDES Resolution to research loss of ice sheets in Antarctica.

There have been 8 annual Appalachian Energy Summits focused on innovative sustainability and energy efficiency initiatives.

Appalachian’s Geologogical and Environmental Sciences faculty have conducted research on all 7 continents.

The Aetosaur lived 230,000,000 years ago, as learned from a fossil discovered by Dr. Andy Heckert (Geological and Environmental Sciences).

Appalachian holds the 1 major in Actuarial Sciences within the University of North Carolina system, located in the Department of Mathematical Sciences. 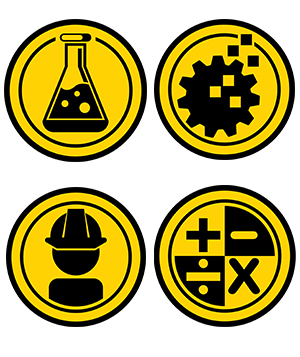 The original STEM acronym has been used to anchor other configurations that may relate to, inform or apply the original STEM disciplines. Arguably the most common alternate acronym is STEAM, in which the A is seen to represent the arts. STEAM as an idea was championed by the Rhode Island School of Design as a way to acknowledge the creative nature of STEM problem solving, communication, visualization and design.